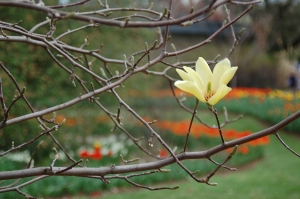 Ahhh, the zoo in the springtime, for me the best time of year to go.  The summer — not so much:  heat and  humidity don’t mix well with the wafting aromas of african animal feces.  But now, the zoo puts on a wonderful floral show with the daffodils, tulips and hyacinths sharing the grounds with the flowering pear trees, magnolias and forsythias.  Oh, and the animals are more active when it is not stinkin’ hot.

This polar bear was doing laps around her enclosure.  I’m guessing summer in the midwest is not her favorite time either.  We watched her for quite a long time, from two different vantage points; we were fascinated by the methodical way she did the circuit.  The arm strokes were nearly identical on each pass around, and she would touch certain rocks along the back wall in exactly the same place each time. 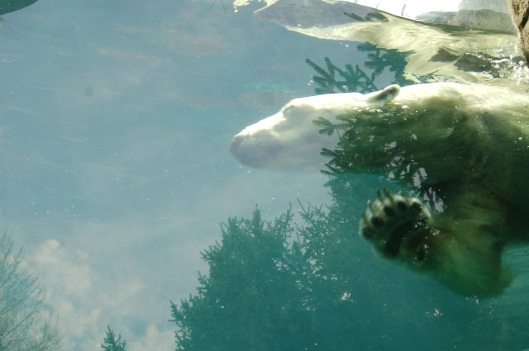 At the risk of anthropomorphic musing, I could not help wondering what she was thinking or feeling or whatever polar bears do.  Did it bring her comfort, in these artificial surroundings, to go round and round in a pattern?  Did swimming laps work all the energy out of her body that must be pre-programmed into a polar bear’s DNA for survival?  Was she just bored out of her mind?  Whatever the reason, she was still swimming the same loop when we walked by two hours later.

We have not been to the zoo very often in the last few years ever.  Trips to the zoo never ended well when the kids were little, so I became zoo-averse early on.  When I see young mothers now, pushing their strollers with 1…2…3… kids in tow, none of them look like they are having a nervous breakdown.  Huh.  I’ll just say it is so much more fun to take the kids to the zoo now that they are a) ambulatory  b) able to read all the cool information about the animals themselves  c) not obsessed with riding the mini choo choo zoo train umpteen times at $5 a pop.  Other than the Little One being suddenly starving every 100 yards (because there is SO much delicious, affordable food at the zoo and the smell of monkey poo really whets the appetite);  it was a fun day.  We’ll just assume he was growing another inch taller that afternoon.