Every fall, a new spider sets up her last camp on our deck.  Every year, I name her Charlotte and watch her go about her business with fascination. 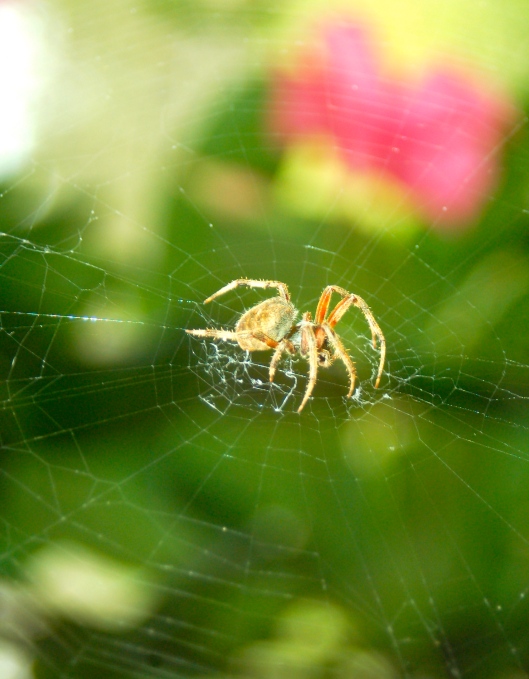 She is not as large, nor did she last as long as some of her predecessors.  But she kept a tidy web and was a good companion for a while.  (Outside spiders = good companions when viewed through window.  Inside spiders, not so much.  Not at all, really.)

One morning before school, as the Little One and I were marveling at the intricacies and symmetry of her web, a bug flew into it and mild-mannered Charlotte transformed instantly into a killing machine.  I think the swift and violent death of the bug was of more interest to the boy than the beauty of the web in the morning dew, but that is just a hunch.

And then, the next morning, she was gone.  I felt a little lonely until I saw one of my Walking Stick buddies on the kitchen screen, so I said good morning to her instead.

This, my friends, is one of the primo benefits of calling myself a writer.  Writers can talk to insects, or plants, or seasons, or themselves, and it is considered normal behavior, creative and charmingly eccentric.  Before?  Not so much normal.  Not at all, really.

10 thoughts on “greetings and salutations”