While on the way to the vet’s office for dear dog’s annual shot-fest and general probing, I received a call from a concerned neighbor.  She had been watching a large coyote in the adjacent yard with amazement and curiosity;  a very rare sight here in our burb.  She was taking pictures of the huge animal sunning itself, when she suddenly saw our cat heading in that direction, pursued by not one but two amorous tomcats.  (There has been a lot of catting around, a springtime hobby of Kitty and enviable aspect of the neutered cat pal lifestyle.)

The neighbor quickly realized the danger sweet Kitty was in, and reached me on my cell just as I pulled in to the vet office, stool sample and nervous dog in hand.  With visions of a possible trip right back to the vet with an injured (or worse) Kitty, I blew though the door blabbling some incoherent story about coyote and cat and neighbor.  They said “leave the dog and run!”, so I threw the leash and tossed the baggie of poo at the receptionist as I sprinted back out the door.

I am quite sure these people are not paid enough for what they do.

Long story short, after Kind Neighbor and I wandered through the woods calling her name (and listening for coyote footsteps), Kitty came trotting back out into the sunshine with her tail in its happy question mark shape.  I scooped her up before she could even rub against my ankles and carried her back home, with my nose nuzzled in her white fuzzy neck.

Her tomcat friends had made themselves scarce.  One boy in particular has been such a frequent admirer around our house that we have named him.  He is Buster.  We don’t know where he lives.  He is scruffy and tough and looks like he has packed a lot of living into about eight lives.  He is the lonesome cowboy of cats.  I imagined him faced with the coyote in the woods, his beloved female in danger, throwing himself in front of her just as the hungry beast with saliva-dripping fangs lunged for her neck, sacrificing his last life for his true love.  I thought if I never saw him again, I would know why.  And how could he not do it, when she is such a sweet girl?  Poor Buster. 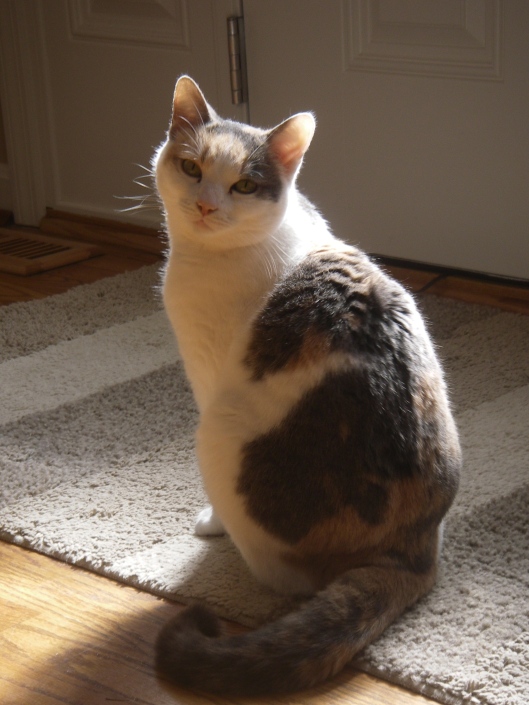 Of course Buster wandered through the backyard about three hours later, probably after his afternoon siesta, looking to see if she was outside again.  Apparently his hero services were not required.

Which leads me to the question: what to do now?  Kitty is an outdoors-loving cat, and not just because of her active social life.  She had been a stray kitten, and clearly loved being outside from the day she came to live with us.  All our previous cats had been indoor cats, but it was clear this one was happiest when allowed to roam around the garden and woods.  When she is outside, she looks like she is smiling.

Does the responsible pet owner do everything possible to prolong the pet’s life to its maximum, or let her sometimes go free to live a happy life that might be shorter?  Holding her in my arms, I wanted to protect her forever.  After her own nap, she wanted back out into the sunshine.  I let her go.  (Then last night I dreamed of finding nothing but white clumps of fur in the backyard the next day.)

I went back to get the dog, and thanked the understanding and caring staff at the vet’s office.  Back home, I pondered this familiar dilemma in the life of a grown-up: when to let go.  Of pets and kids and careers and life’s baggage.  Maybe pet decisions are good practice for the tween years.  Life is full of coyotes, but Kitty does not live in fear.  I’m still working on it.

4 thoughts on “a funny thing happened on the way”